And How To Repurpose Them For Waiting in Line

Road trip to Toontown! Who's In?

In today’s world full of tablets and in-car video entertainment systems it’s easy to forget about good old-fashioned car games as a way to pass the time.

But I’d argue there is no better time to connect and make memories as a family than by playing games together when trapped in a car hurtling down the highway.

And better yet, you can repurpose those same car games to entertain the kids while waiting in line to get on a ride, for a parade or show to start, or for your food to arrive at a meal.

I’ve compiled a list of some of the best family car games you can play with kids of any age, no purchase necessary. Better yet, I’ve given ideas on how you can repurpose them for when you are in the parks.

So, ditch those electronics — for at least a good chunk of the drive — and give these games a try!

Line for Dumbo is always long!

A classic waiting game! Someone thinks of something and the others have 20 questions to try and guess what it is. No repeat questions. Person who guesses correctly goes next.

Collectively think of a category (Disney characters, food, movies, etc). Start with the letter A, and moving down the alphabet, everyone comes up with something in that category that starts with the letter.

Cows On My Side

Everyone be on the look out for a cow on the side of the road. When you see one on your side, be the first to yell "Cows on my side!" Every time you yell you get a point.

If you see a cow on the other side, yell "Cows on your side!" If you do so before the person sees the cow on their side, you steal the point.

Bonus point: If anyone sees a cemetery scream "Ghost Cow," stealing all the other side's points.

How to repurpose for in the parks: Instead of cows, search for characters and yell left or right. "Mickey on the right!"

Another classic waiting game of trying to find words in alphabetical order using billboards, business and road signs. (No license plates.) First one to get to the end of the alphabet wins.

How to repurpose for in the parks: Use attraction, restaurant, and direction signs. Be sure to check for words written in the attractions themselves, and the warning signs at the front of the line.

You know how this one goes. Someone says "I spy with my little eye something (fill in the blank. example: blue, furry, big)" The others have to try and guess what it is.

Be on the lookout for license plates from every state. Make a list and mark them off as you go.

How to repurpose for in the parks: Talk to the people around you in line and ask them where they are from. See how many people you can find from different states, or even countries.

A simple game of asking participants to choose between two undesirable things. Example: "Would you rather have to do a sink full of dishes with caked on spaghetti sauce or take out the trash full of smelly fish guts?"

Make them explain why those chose what they chose. "Take out the trash, because it would be over quicker and I can shower afterwards."

Collectively think of five words that no one is allowed to say during the trip, or for a defined set of time. Think of a fun penalty if someone says one of the words. For example, they have to sing a song loudly in public, go up to a stranger at a restaurant, etc. Try to think of words that would typically be used frequently when on a trip like yours, or you know people have a tendency to say all the time.

Look out for interesting looking families in the cars around you. When you see one yell out "fictional family spotted!" Then everyone has to come up with an interesting story about who they think the family is, where they are coming from, and where they are going.

How to repurpose for in the parks: You don't want to accidentally offend someone who can hear what you are saying. I would keep this one for the car.

Start the game by having one player name a location anywhere in the world. For example, Hawaii, San Francisco, the Grand Canyon, etc. The next person has to come up with a different location that starts with the last letter of the location the previous player named. For example, Idaho, Oregon, the Nile River.

How to repurpose for in the parks: You could keep this one as is, or make it more challenging and require that people come up with locations or attractions in the park you are visiting only.

First person thinks of something fortunate that is happening right now. For example, we are driving to Disneyland right now.

The next person has to think of something unfortunate that is tied to the first event. For example, but it will take us 15 hours to get there.

Keep the story going, alternating between fortunate and unfortunate until the story's conclusion. For example, "it will take us 15 hours but we can listen to music along the way. But we will have to listen to dad's singing voice."

Create an interesting story together one word at a time. First player comes up with a word to start a sentence. The game then continues around the car where participants add a word to the sentence. Players can also contribute punctuation to end the sentence. (Example: Person 1: I Person 2: see, Person 3: a Person 4: dog Person 5: period.) See what kind of wacky stories you can come up with!

I'm Going on a Picnic

Go around the car and take turns listing out things you would bring to a picnic. Each person has to list out all the items that were already named before adding their own. If a player cannot remember the names of all the items already listed they are out.

How to repurpose for in the parks: Keep the same, or come up with a new theme based on the park you are at. For example, things that are part of Ariel's collection in her secret grotto.

Similar to 20 questions but object is to come up with a movie title. Person thinks of a movie title and tells everyone the number of words in the title. The rest of the participants have 20 questions to try and guess the title of the movie.

How to repurpose for in the parks: Keep the same, or require people stick to a certain theme based on where you are. For example, Disney movies, Superhero Movies, Animated classics, etc.

Going at rope drop? You'll spend some time waiting at the gate for sure.

Take turns waving at other cars or trucks. You get a point if they other people are "sweet" and wave back. No points if they are "sour" and do not. Bonus points if they make a funny face at you or a trucker honks his big horn.

How to repurpose for in the parks: Might be a little awkward but you could wave to other people waiting around you. Bonus point if you get a character in a parade to pay special attention and wave at you.

Turn the radio on to a random station. First person to name the song playing gets a point. Turn the dial again and keep going.

How to repurpose for in the parks: Pay close attention to the music playing in your hotel, in line at an attraction, in a restaurant, and see if you can come up with the name or from what movie it is from. This one works great if you are on a Disney Cruise ship!

What is your family’s favorite way to pass the time waiting in line or on a rode trip? Let me know in the comments!

I am a travel agent with Magical Vacation Planner and can help you plan an unforgettable vacation with your family. Email me, head to my Facebook page, or set up time to chat if you’d like to start planning your magical vacation.

Or head here to download your copy of my free Disney Vacation planning worksheets. 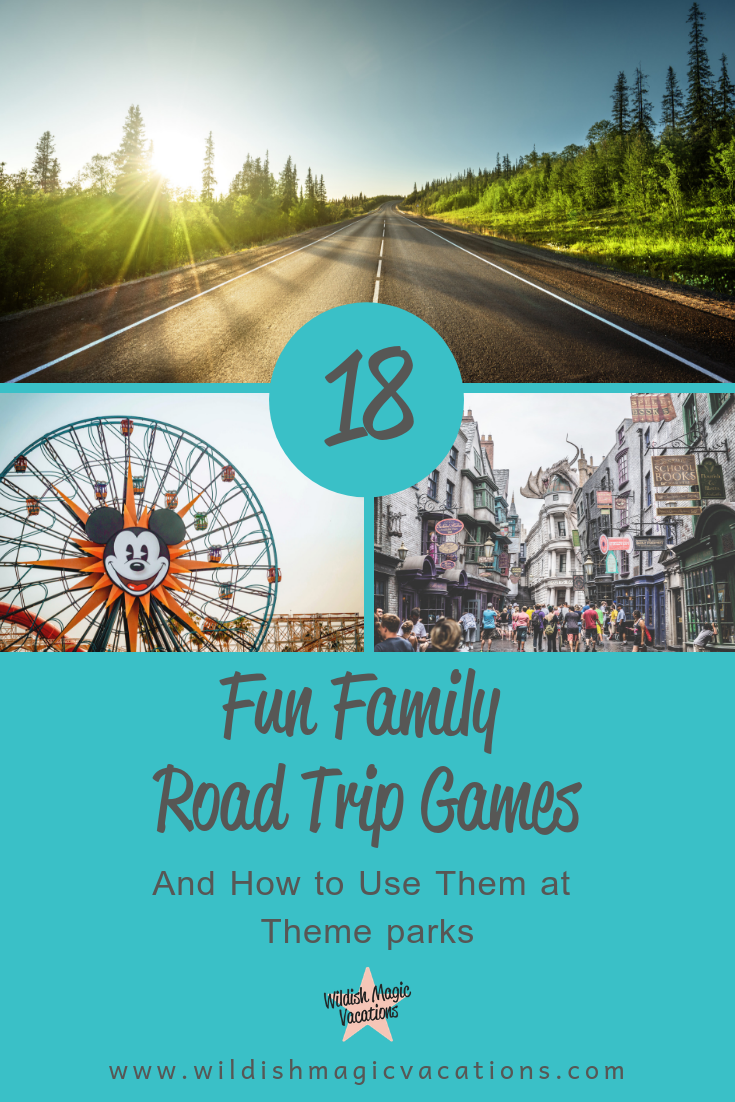 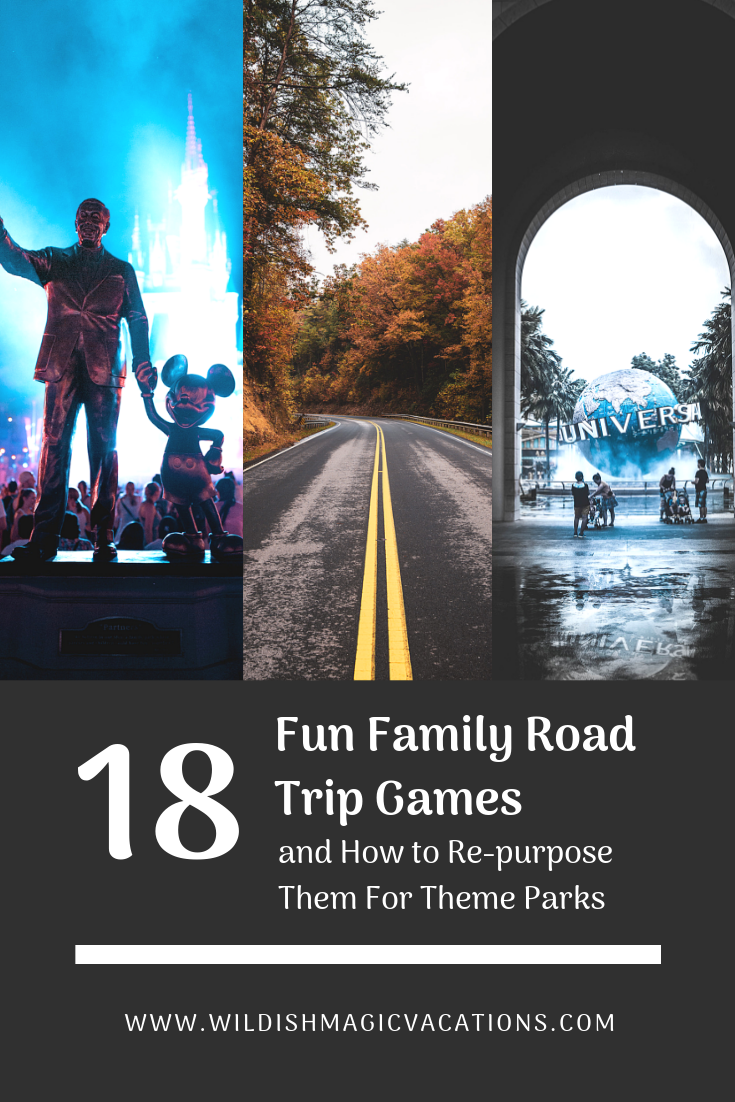 All About Disney’s Droid Depot

A Wildish Escape for Mental Health

Why Story Book Dining at Artist Point Is the Best