You all know I’m a HUGE fan of Disney Cruise Line. They are amazing and by far one of the best family vacations you can take.

And it’s clear I’m not the only one. Disney recently announced that it was named #1 Cruise Line in the World for the eighth consecutive year by Conde Nast Traveler readers!

One of the unique and fun family events they have on board during most sailings is Pirate Night. It has been my favorite night of each of the cruises we’ve taken on Disney Cruise Line, and it could be yours too.

Our first Disney cruise we didn’t really know what to expect, or that it was even a thing. So, we were woefully prepared.

We had our cute little family shirts, wore the fun Mickey pirate bandanas they pass out to all the guests (an awesome free souvenir by the way), and thought that would be enough. Boy we were wrong!

I don’t want the same thing to happen to you. Because Pirate Night is AWESOME, and you will want to be prepared to fully take advantage of it.

What can you expect and how should you prepare? I’m about to break it all down for you with tips on how you can make the most of it.

Us in our cute little pirate shirts and bandanas

As I mentioned above, we had our fun little pirate themed matching family shirts for the evening. While they were very cute, and super appropriate to wear on the cruise in general, they were so plain and lacked imagination. You can do better!

People really get into pirate night and dress up to the nines in themed attire. It’s like Halloween on every cruise.

Do yourself a favor and do some research on fun pirate costumes you and your family can wear. Pinterest is of course a great resource, borrow some pirate themed duds from a friend, or hit your favorite Halloween costume shop if you can.

There are fun family pirate themes you can do. Some ideas include a Peter Pan theme (Hook, Peter Pan, Tinkerbelle, Lost Boys), Pirates of the Caribbean theme (mom can be the Red Lady!), or even Jake and the Neverland Pirates if you have little ones.

But there are so many pirate costume variations out there, you can certainly find something fun and unique for your family to wear. Or make your own if you are crafty like that. (I envy you crafty folks! I want so badly to be one but could make my own Pinterest fails blog with my success so far.)

Disney Photopass photographers will be out and about to capture your amazing family in costume. There will even be special photographers set up in the main lobby with Pirate Night specific backdrops that you can take advantage of. Because when you put so much effort into your Pirate Night costume, you want to be sure it’s captured forever!

Pro Tip: The lines for these special photographers and backdrops can get long. Line up early in the evening if you can.

If matching family shirts are more your style and you don’t feel like dressing up as a Pirate, no worries. You are not required to dress up to enjoy all that Pirate Night has to offer.

But if Halloween and dressing up is your jam, take full advantage on Pirate Night.

Us Up on Deck During the Pirate Night Party

Special Food and Drinks at Dinner

During the day before Pirate Night, I would highly recommend you eat light. Maybe even just graze and snack. Because there will be a TON of delicious food to eat that night.

All the restaurants change their look for the night, so no matter which restaurant you are assigned to in the rotation that evening you’ll get a similar experience and have a pirate theme.

The servers of course get into it and have a special attire, and there are fun Pirate themed food and specialty drinks to enjoy.

We’ve been lucky enough to eat Pirate Night dinner in Animator’s Palate, my favorite rotational dining restaurant on any of the ships. They change the pictures on the walls to be pirate theme, with pirate ships and conceptual artwork from the Pirates of the Caribbean ride. As a Disney history freak, I was enthralled with watching these displays change through the course of dinner.

Regular dinner is just the start of all the food available to you on Pirate Night, so you might not even want to eat a big dinner either.

Cabanas stays open late on Pirate Night, serving up its amazing buffet. I’m talking into the early morning hours, so after a night of dancing on the ship deck you’ll have someplace to head to handle all those late-night munchies.

More on that dance party later……

Look out for Special Character Meet-N-Greets

It wouldn’t be a Disney vacation without fun character meet-in-greets, and Pirate Night is no different.

The usual suspects will be out dressed in their best Pirate attire. Of course, Hook and Smee don’t need to bother with a new outfit. But the rest of the gang will be out and about in their pirate best.

You’ve already seen most of these characters since day one of the cruise. But they usually save a special character just for Pirate Night, and he’s a good one. Captain Jack Sparrow!

He is part of the fun show, but he also comes out for meet-n-greets and he might have been my favorite character of the entire trip.

Whoever was the actor playing Jack Sparrow on our ship was amazing. He had the mannerisms, voice, and personality down. It could have been Johnny Depp standing there if I didn’t know better. But you’d expect nothing less from Disney cast members, am I right?

Pay attention to that day’s Navigator so you’ll know when and where he’ll be hanging out so you can meet him. And get your cameras and autograph books ready.

There is a Pirate themed stage show up on the top deck on Pirate night. The show varies depending on the ship, but they are all cute, fun and interactive.

They teach you a fun pirate dance at the start of either show. When they are teaching you the dance, don’t just stand there, participate! It is way more fun if you do. Who cares if people are watching you. This is a great opportunity to act silly and make some magical memories with your kids. Carpe Diem!

The show ends with a fireworks show that’s impressive considering you are just on a ship out in the ocean.

Fun fact, the firework debris is safe and made with biodegradable materials, so whatever falls into the ocean won’t harm it or the sea life. Just one of the many ways Disney Cruise line is dedicated to minimizing their impact on the environment.

Once the fireworks are done, the show isn’t over. A DJ plays music for several hours afterwards so you can dance the night away under the stars in the middle of the sea.

The main party is up on the top deck, but there is plenty to do down below as well and still be in the pirate spirit.

As you can see, there is tons of Pirate Fun to be had on pirate night on a Disney Cruise.

Get on yer best pirate gear 'n 'ave a swashbucklin' night. It could be yer fav'rit night o' th' cruise too.

Be sure to check out these other posts aimed at helping you prepare for a Disney Cruise:

Getting into the Pirate spirit all cruise long.

I am a travel agent with Magical Vacation Planner and can help you plan an unforgettable vacation with your family. Email me, head to my Facebook page, submit a quote request, or set up time to chat if you’d like to start planning your magical vacation.

Or head here to download your copy of my free Disney Vacation planning worksheets, or here for a free Disney Stroller Checklist. 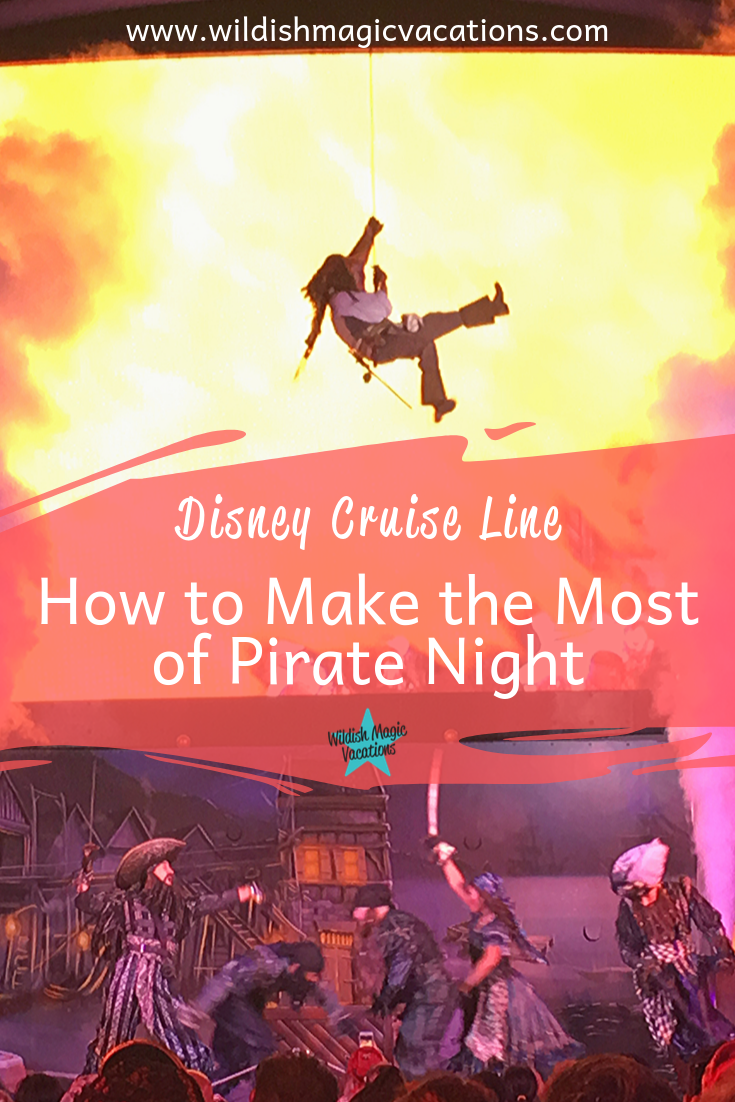 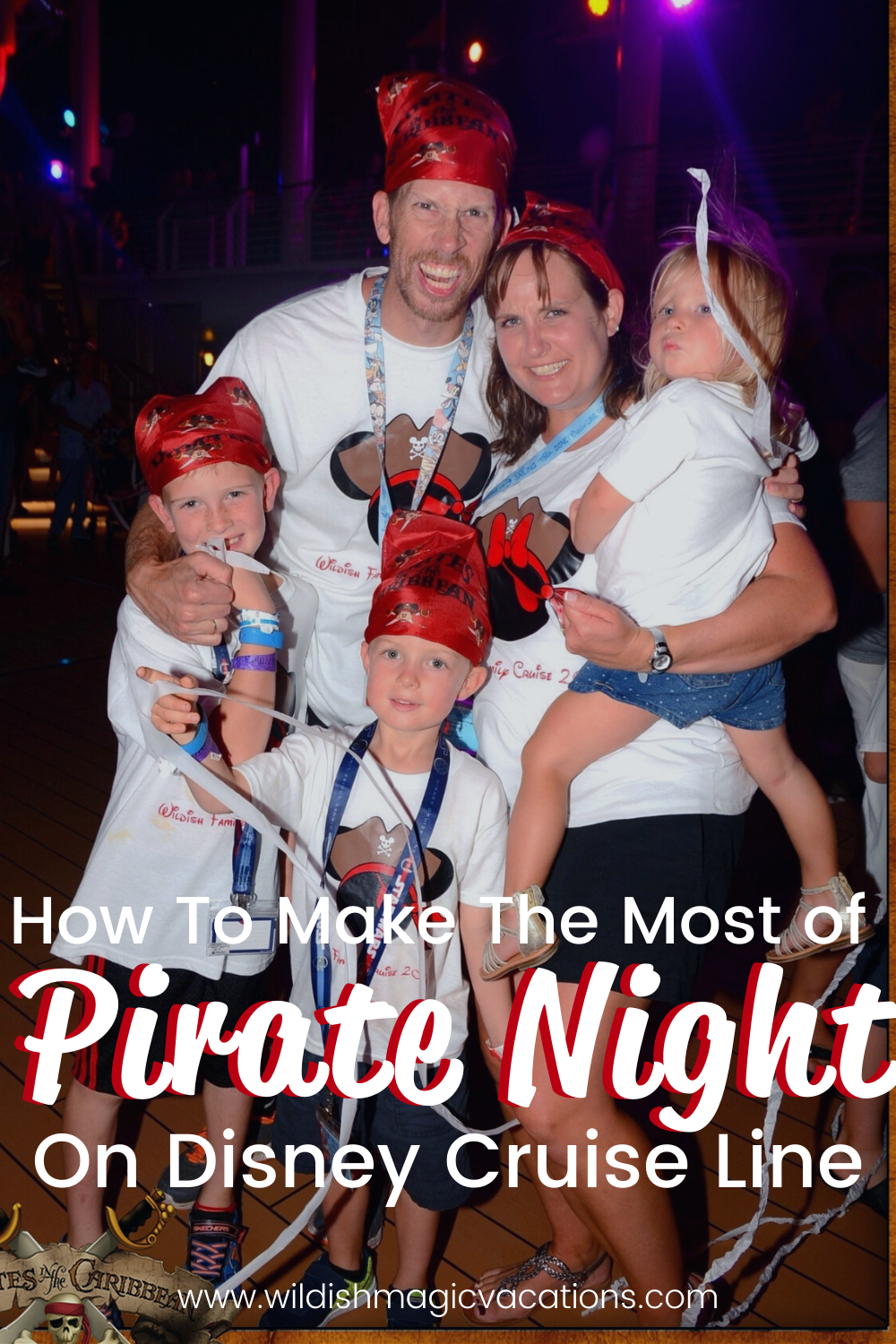 10 Reasons Why Disney Cruise Line is the Perfect Family Vacation

How to Save Big on Your Family Vacations

How to Reward Exceptional Cast Members on Disney Cruise Line